This unit discusses Frederick Winslow Taylor’s Scientific Management, and compares it with the approach to management put forward by the Lean movement.

Taylor published his best-known work, The Principles of Scientific Management, in 1911. It became one of the 20th Century’s most influential texts on management. Among the ideas he promoted were:

While these ideas can be effective for work that is algorithmic, where there exists a single “best practice” which can be followed exactly and will always produce the same outcome. However Taylorist ideas are not effective in knowledge work, where there is no one “best practice” that will be effective in all situations, and where teams must problem solve in order to discover how to proceed.

The Lean movement has championed a management paradigm that finds its roots in Japanese manufacturing, particularly early leaders in the Toyota company such as Shigeo Shingo, Taiichi Ohno, and Sakichi and Kiichiro Toyoda, combined with the work of luminaries such as W. Edwards Deming. This paradigm emphasizes the importance of giving workers the resources, tools and authority to improve their work, combined with a set of heuristic tools that enable just-in-time delivery and building in quality at the source.

In the Lean paradigm, managers play an important role in enabling workers to implement these tools in a scientific way in pursuit of clearly defined organizational goals. This, in particular, requires investing in the development of people rather than treating them as replaceable, interchangeable resources.

In this unit I discuss Deming’s Fourteen Points for Management, a short read that bears long and repeated reflection. In addition, I refer to the following books:

This unit explores research performed by DevOps Research and Assessment, Google, and Puppet into how to build high performing organizations. The research shows:

In the research, we model culture using a typology created by Ron Westrum. 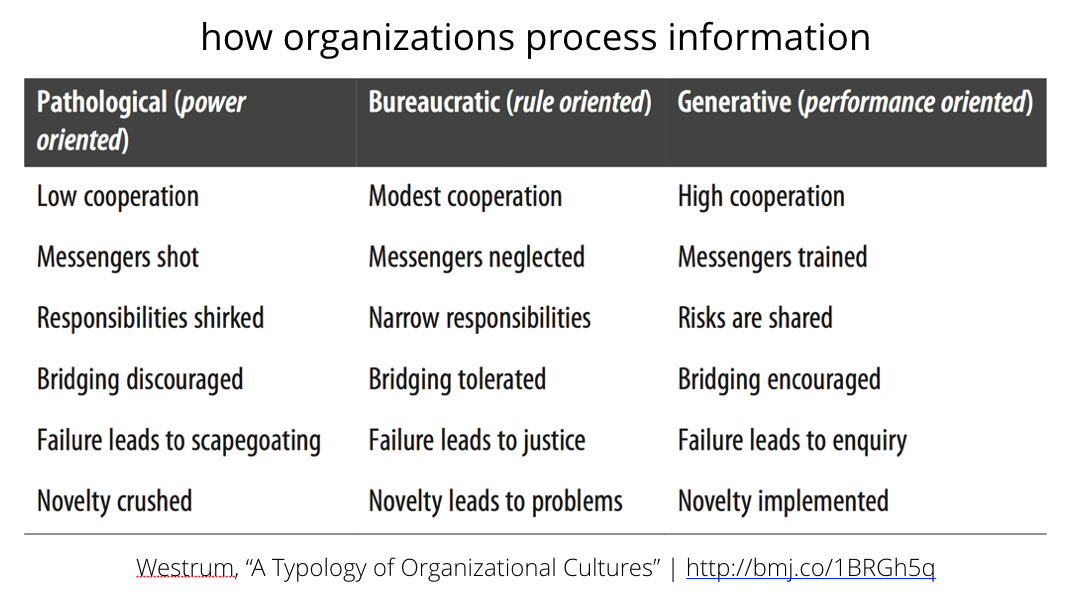 Two particularly notable features of this typology are how we deal with failure and how we deal with novelty. High performing organizations treat failure as an opportunity to learn how to improve. Organizations that behave this way are more likely to innovate, since in an organization where failure is punished, people are unlikely to take risks. This is confirmed in a study performed by Google, where psychological safety was found to be the biggest factor in high performance.

Unit 3: How to Change Culture: The NUMMI Case Study

This unit tells the story about NUMMI, and how a joint partnership between GM and Toyota turned GM’s worst performing team into its best performing team, and how they changed the culture of the organization to achieve this.

A good reference for this story is Episode 561 of the This American Life podcast. A transcript is also available.

The idea of building quality in to work, which is also one of Deming’s Fourteen Points, has a long history in Toyota, starting with their Automatic Loom Type G, which detects problems automatically and tells the operator, rather like a continuous integration system which runs automated tests whenever a change is made to a software system and tells the developers so they can fix it straight away.

In his award-winning article on how NUMMI changed culture, John Shook says, “what changed the culture was giving employees the means by which they could successfully do their jobs. It was communicating clearly to employees what their jobs were and providing the training and tools to enable them to perform those jobs successfully.” Similarly when building software, the technical practices of continuous delivery can enable the same outcome, and has been shown to have a positive impact on culture, as well as reducing burnout, improving quality, and increasing IT performance.

Often organizations think they can improve by hiring “the best” people. But in organizations, building effective teams are what’s important, and systemic effects dwarf individual differences. As Deming says, and as the NUMMI case study shows, “a bad system will beat a good person every time.” In Malcolm Gladwell’s article The Talent Myth he tells the story of how Enron operated by hiring the best people it could find and then letting them get on with it. Gladwell writes, “The talent myth assumes that people make organizations smart. More often than not, it’s the other way around…Our lives are so obviously enriched by individual brilliance. Groups don’t write great novels, and a committee didn’t come up with the theory of relativity. But companies work by different rules. They don’t just create; they execute and compete and coordinate the efforts of many different people, and the organizations that are most successful at that task are the ones where the system is the star.”

Gladwell also discusses the work of Carol Dweck. In her book Mindset: The New Psychology of Success, she discusses her research program which identifies two mindsets: “In a fixed mindset, students believe their basic abilities, their intelligence, their talents are just fixed traits. They have a certain amount and that’s that, and then their goal becomes to look smart all the time and never look dumb. In a growth mindset, students understand that their talents and abilities can be developed through effort, good teach- ing, and persistence. They don’t necessarily think everyone’s the same or anyone can be Einstein, but they believe everyone can get smarter if they work at it.” In technology in particular, where the skills required change regularly, an important goal for managers is to create a growth mindset in teams.

An important way that high performance organizations move fast is by creating autonomous teams. However this requires careful organizational design, you can’t just tell teams “be autonomous!” Rather, we should:

Managers have an important role in creating a learning environment which encourages a growth mindset. Examples of how they can achieve this include:

In this unit I summarize five principles to create high performing teams: